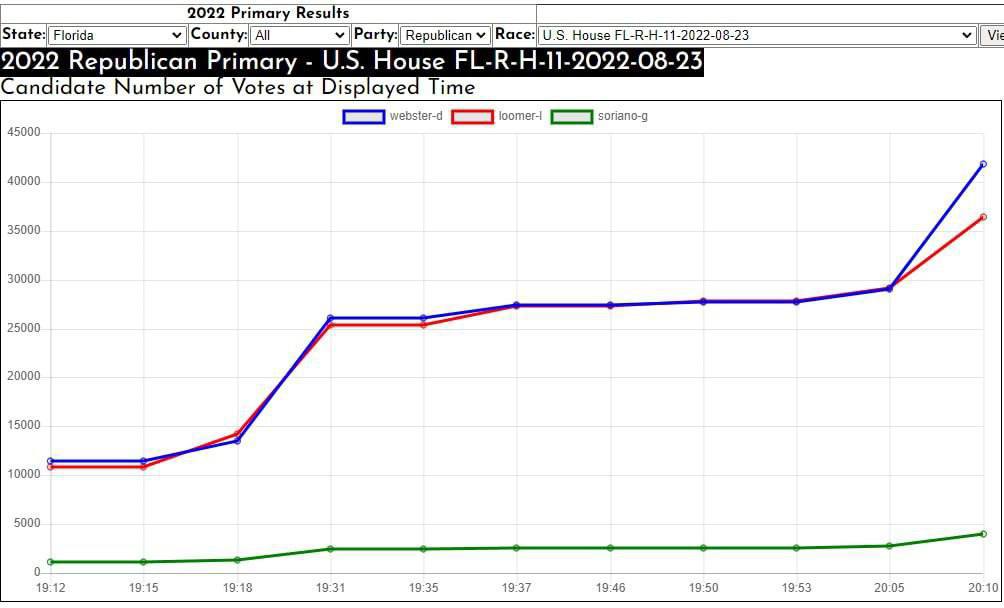 I want to say thank you to all of my supporters, all of my volunteers, and my staff for their hard work on my campaign and the faith all of you amazing patriots put in me throughout this race. I am so sorry that I didn’t post anything last night or earlier this morning. But, as you can imagine, I am devastated, and I am utterly heartbroken and saddened over the state of our country, our Republican Party, which is an active participant in the voter fraud machine here in America.

As you all saw last night, the Laura Loomer For Congress campaign had the nation on its heels because the entire night, I was ahead of Daniel Webster, beating him in the election. Then, there was a very strange long pause in the counting of votes while I was still ahead of Daniel Webster. And then all of a sudden, a drastic shift in numbers at the 11th hour occurred after the Supervisor of Elections websites crashed (while I was ahead in votes).

The media was at my party. They were all reporting that I was expected to win. And everyone saw all night I was beating Daniel Webster, against all odds in our rigged election system.

I just want you all to know OUR FIGHT IS NOT OVER.

I DO NOT CONCEDE. And I encourage all of my supporters and all of my voters to NOT support Daniel Webster and the corrupt ESTABLISHMENT RNC and Big Tech voter fraud machine that is propping his feeble body up and depriving my constituents of the representation they deserve and need. I am calling for Daniel Webster to RESIGN because everyone knows he is beyond unfit to serve. He didn’t campaign. He refused to debate me, and it’s because his health is worse than Joe Biden’s.

I weep not for myself, but for our country and the constituents of Florida’s 11th District who do not have a Congressional Representative as a result of voter fraud, illegal Big Tech election interference, and RNC corruption.

Please make me one promise:

And I’ll never stop fighting for you to have your voices heard and your votes counted.

Thank you so much. I love you all.